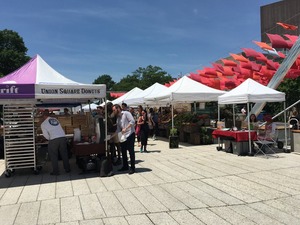 Berklee artists will perform a wide range of musical styles throughout the summer at the Harvard Farmers’ Market. Performances happen on Tuesdays from 12:00 p.m. to 1:00 p.m. in front of the Harvard Science Center Plaza.

Founded in 2005, the market builds community by providing opportunities to buy directly from local farmers, benefits the environment as small-scale farms conserve land, and supports local families by allowing farmers to sell their produce for full price. Hosted on the plaza each year, the Harvard Farmers' Market is a vital part of Harvard University Dining Services' Food Literacy Project.

Mar Fayos, a jazz singer from Barcelona, Spain, is a graduate of Berklee College of Music, where she studyied vocal performance, arranging, and contemporary conducting.

Georgia Parker is a 20-year-old English singer-songwriter with a passion for writing, recording, and performing. She tells stories of love, angst, and pain with bitterly honest lyricism and a voice that conveys heart-wrenching emotions.

Havins is an alternative Americana band based in Boston.

The Ruta Beggars is a four-piece bluegrass string band.

Paden Osburn is a blues-rock singer-songwriter from Kansas City, Missouri.

Ricky Peña is an Ecuadorian American performer, songwriter, and multi-instrumentalist.

Lil, a Connecticut artist studying at Berklee College of Music, is a singer-songwriter known for her sultry voice and intriguing lyrics. She incorporates different genres, including neo-soul, jazz, indie, rock, and R&B, into her music.

Brandon Harris, an R&B artist based in Chicago, Illinois, began making music at age 10. Influenced by artists such as Michael Jackson, Stevie Wonder, Usher, and Beyoncé, Harris is currently working on a new album.

Amandla Khaled, who performs as Amandla, found her voice through writing music.

Olivia for Now is the project of Olivia Fan Davis, a sixth-semester performance and songwriting student at Berklee College of Music.

Ella-Jane Sharpe, a British Australian jazz vocalist and pianist studying at Berklee College of Music, is a diverse artist with a passion for performance and sharing her music.