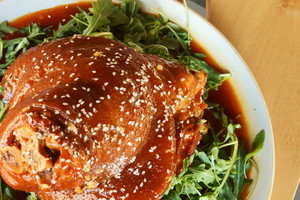 Chinese New Year festivities officially begin on February 5 at midnight and according to the Chinese calendar, 2019 marks a year to celebrate the twelfth animal of the zodiac whose chubby faces and big ears symbolize fortune. In honor of The Year of the Pig, Sumiao Hunan Kitchen – the only Hunanese restaurant in the Boston-area owned by an impassioned restaurateur and scientist Sumiao Chen – will be bringing the festival’s beloved traditions to Kendall Square.

THE RED ENVELOPE:
The act of gifting money in red envelopes is one of the most recognized traditions observed during the Lunar New Year and Sumiao will be gifting these to each guest on February 4 as their way of passing on a year of good fortune and blessings.

THE “NEW YEAR’S EVE” FEAST
Family and food are two of the things that Chinese take most pride in, and the biggest example of this is the annual reunion dinner held on “New Year’s Eve,” (2/4 this year) which consists of special meats and is compared to Thanksgiving Dinner in the U.S.. The feast is followed by midnight fireworks and the burning of bamboo sticks and firecrackers to chase off evil spirits. Inspired by the most special meal of the year and the festivities that surround it, Sumiao has thoughtfully created the following menu which will be showcased during the months of February and March:
 Hot and Sour Sea Cucumber with Konjak ($48)
 Regimen Black-boned chicken Stew ($48)
 Firecracker Pork Kidney ($26)
 Fortune Pork Shank ($38)
 Family Reunion ($48)
 Nostalgic Hometown Duck Stew ($36)
 Stir-fried conch with hotbed chives ($48)
 Harvest of Five Grains ($22)
 Sautéed Snow Pea Shoots with broth ($18)
 Lucky Eight Jade Sweet Rice ($16)

THE RED LANTERNS
Historically used as a light-source, lanterns have become a symbol of national pride in China. While these red and gold oval-shaped décor pieces adorn the restaurant during Chinese New Year, the bar team as SHK will be shaking up a Red Lantern cocktail made with China’s signature liquor baijiu mixed with amaro, Aperol, lemon juice, and of course, some grenadine for the lucky red color and garnished with red dates ($12).

Here’s to all of your wishes being fulfilled in the New Year!