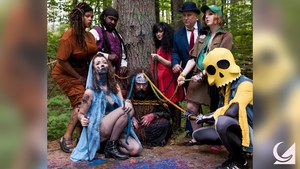 Walter Sickert & The Army of Broken Toys have a large New England following and routinely tour both the US and internationally. The band not only executes rock shows, but have also written and performed an award winning musical “28 Seeds” with sell-out performances at the Boston Center for the Arts as well as reprising the musical “Shockheaded Peter” in partnership with Company One, which won several industry awards for Best Musical, Best Actor (Walter Sickert), Best Sound and Best Artistic Design. Walter was recently honored by the Nashville Film Festival for Best Music for the score he composed for the film “Some Freaks” which will have its international release in August 2017.

Join us for an apocalyptic party in space that starts on Earth and jettisons out through surrealist multiverses into rabbit black holes straight through the psychedelic planetarium maw!

Stay tuned for the link to stream the premiere of SubSpace Sessions: Walter Sickert & the Army of Broken Toys! More information coming soon!

This program is free thanks to the generosity of the Lowell Institute.

Our building may be closed, but science never stops. And neither does the Museum of Science! Join us for SubSpace- Adult Programs After Dark, an entire virtual season of FREE live events, conversations, art experiences, gaming and more. Participate and redefine your nightlife with us - only at the Museum of Science!

SubSpace Sessions take the live music experiences of the Charles Hayden Planetarium to new dimensions- bringing the innovative and groundbreaking work to you virtually! Don’t miss these premiere events that fuse together the music of some of Boston’s best artists and bands with cutting-edge Planetarium visuals!

The Museum of Science has partnered with an incredible lineup of Boston musicians to create the ultimate audio-visual show that fans can stream directly into their homes, experiencing the music they love in an entirely new way. With imagery developed and adapted from the cutting-edge technology of the fulldome Planetarium medium, each SubSpace Sessions is a unique visual journey, inspired by the music of acts like Walter Sickert & the Army of Broken Toys, Abraham and more!

If you enjoyed the Museum of Science’s SubSpace Sessions: Walter Sickert & The Army of Broken Toys, please visit www.mos.org/sciencematters to support MOSatHome.