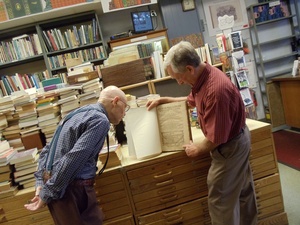 Boston, MA – Kenneth Gloss, proprietor of the internationally known Brattle Book Shop in Boston’s Downtown Crossing section, will give a free and open talk Wednesday, November 6, 6:30 pm at the Sturbridge Senior Center, 480 Main Street, Fiskdale, MA. The event is sponsored by the Joshua Hyde Public Library. Ken will discuss the value of old and rare books.