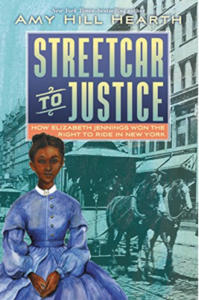 Boston-based actress Adjovi Koene will perform the role of civil rights hero Elizabeth Jennings in a one-woman, one-hour play, “Streetcar to Justice,” an adaptation by Amy Hill Hearth of her book of the same name, at the East Boston Public Library on March 18th at 630pm. Admission is free.

Elizabeth Jennings was a black schoolteacher and church organist in Manhattan who was barred one summer day in 1854 from boarding a horse-drawn streetcar meant for whites-only. Miss Jennings was assaulted and bodily removed from the streetcar. With the support of her family, the black community of New York City, and leaders such as Frederick Douglass, she took her case to court. Represented by a very young lawyer named Chester A. Arthur – who would later become the twenty-first president of the United States – Miss Jennings was victorious, marking the first significant step in the fight to desegregate New York City’s public transportation.

Streetcar to Justice, published in 2018 by HarperCollins/Greenwillow Books, is the first biography of Miss Jennings. The book was chosen by the American Library Association as a Notable Children’s Book for 2019. It is Ms. Hearth’s tenth book and her first for middle-grade to adult readers.

Ms. Koene, of Brookline, will be the first actor to perform Ms. Hearth’s play. Her previous work on stage include To Kill A Mockingbird, Water, Thirsty, An Aster Blooms in the Fall, and Different is good-sometimes. Ms. Koene film roles include Aster & Sidney, and Brute Sanity. Ms. Koene won the Best Female Actor at the Something Wicked Film Festival for her work in the feature film, Brute Sanity, currently on Amazon Prime. TV credits include Sexting in Suburbia, and Unraveled.

Ms. Hearth’s first book, the 1993 oral history Having Our Say: The Delany Sisters’ First 100 Years, was a New York Times bestseller. It was adapted to Broadway and for an award-winning television film. Ms. Hearth lives near New York City and is represented by William Morris Endeavor.

For more information about the performance of Streetcar to Justice, contact Margaret Kelly (617) 569-0271 at the East Boston Public Library.