Strand of Oaks with Jason Anderson at The Sinclair 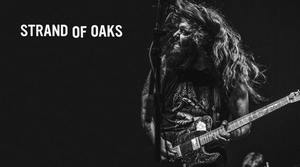 Hard Love, Tim Showalter's latest release as Strand of Oaks, is a record that explores the balancing act between overindulgence and accountability. Recounting Showalter's decadent tour experiences, his struggling marriage, and the near death of his younger brother, Hard Love emanates an unabashed, raw, and manic energy that embodies both the songs and the songwriter behind them. "For me, there are always two forces at work: the side that's constantly on the hunt for the perfect song, and the side that's naked in the desert screaming at the moon. It's about finding a place where neither side is compromised, only elevated."

During some much-needed downtime following the release of his previous album, Heal, Showalter began writing Hard Love and found himself in a now familiar pattern of tour exhaustion, chemically-induced flashbacks, and ongoing domestic turmoil. Drawing from his love of Creation Records, Trojan dub compilations, and Jane's Addiction, and informed by a particularly wild time at Australia's Boogie Festival, he sought to create a record that would merge all of these influences while evoking something new and visceral. Showalter's first attempt at recording the album led to an unsatisfying result-a fully recorded version of Hard Love that didn't fully achieve the ambitious sounds he heard in his head. He realized that his vision for the album demanded collaboration, and enlisted producer Nicolas Vernhes, who helped push him into making the most fearless album of his career.

Throughout the recording process, both Showalter and Vernhes maintained an environment that paired musical experimentation with a mindset that defied Showalter's previous studio endeavors: the atmosphere had to be loose, a celebration of the creative process and a reinforcement of the record's core themes. "In a time of calculation and overthinking, I wanted to bring back the raw, impulsive nature that is the DNA of so many records I love." And in keeping with that loose, hedonistic vibe that encompasses so much of Hard Love, Showalter looked to his best friend, Jason Anderson, whose musical prowess and expert shredding augmented the unrelenting energy that would become the record's backbone.

This uninhibited and collaborative studio experience led to the most dynamic album in Strand of Oaks discography, moving beyond Showalter's original concept for a singularly feel-good record to something more complex and real. For as much as Showalter wants this record to seem like a party, it's more than that. It feels like living. "You went away...you went searching...came back tired of looking" is how Showalter begins the title track, a sentiment that epitomizes Showalter's own mentality in beginning Hard Love. And as the record progresses, so do the themes of dissatisfaction and frustration with love, and family, and success, and aging, both in personal experience and songwriting.
"Radio Kids," Showalter's infectious, synth-driven ode to youth and a time when music represented something pure and uncomplicated, perfectly encapsulates his desire for escapism from both his adult responsibilities and a world he no longer recognizes. But if there's a sun in the Hard Love solar system, it's "On the Hill," a psychedelic, celebratory homage to three days in the excesses of that mind-altering Boogie Festival. "On the Hill" captures the true zeitgeist of how Showalter wants this record to feel. "It's like I had to fly across the world to find out who I was...it was all about getting loose, and connecting with people on a primordial level... letting go of all the bad things, losing your inhibitions, and figuring out what it means to be alive." The accumulating intensity that Showalter crafts throughout this flagship track seems to effortlessly achieve an almost hallucinogenic ambiance, with images of lighters being lifted, concert-goers embracing, and the magnitude of the moment eliciting nothing less than mass euphoria.