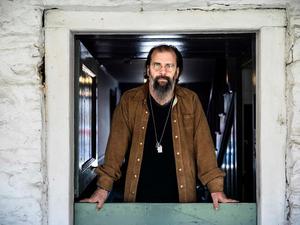 Steve Earle (born Stephen Fain Earle on January 17, 1955 in San Antonio, Texas) is a singer-songwriter best known for his country music and rock 'n roll tinged "alt-country." He is also a published writer, a keen political activist (particularly in protesting against the death penalty in the U.S., as in his song "Ellis Unit One" from the movie Dead Man Walking), and has written and directed a play. Earle also had small roles on the HBO television shows "The Wire" and "Treme". His sister Stacey Earle is also an acclaimed singer-songwriter, as is his most recent wife, Allison Moorer, whom he wed in 2005. His first son from an earlier marriage is the singer-songwriter Justin Townes Earle, named for Earle's hero Townes Van Zandt.

Earle was born in Fort Monroe, Virginia, and grew up near San Antonio, Texas. His father, Jack Earle, was an air traffic controller. Although he was born in Virginia where his father was stationed, the family returned to Texas before Earle's second birthday. They moved several times but Earle grew up primarily in the San Antonio area.

Earle began learning the guitar at the age of 11 and placed in a talent contest at his school at age 13. He is reported to have run away from home at age 14 to follow his idol, singer-songwriter Townes Van Zandt around Texas. Earle was "rebellious" as a youngster and dropped out of school at the age of 16. He moved to Houston with his 19-year-old uncle, who was also a musician, where he married and worked odd jobs. While in Houston Earle finally met Van Zandt, who became his hero and role model.

In 1975, at the age of 20, Earle moved to Nashville and began working as a songwriter. In these early days, he recorded with Guy Clark and Emmylou Harris. He finally scored a country hit in 1981, writing Johnny Lee's top ten cut "When You Fall in Love." Earle's early work as a performer tended towards the rockabilly sound, popular at the time. In 1986, his first proper album Guitar Town was a critical and commercial success. It sold over 300,000 copies and led some to herald him as a saviour of country music.

Earle long struggled with drug abuse. His addiction eventually caused a departure from performing and recording after he was dropped by MCA in 1991. Whilst in jail on drug and firearm charges, he kicked the habit and returned to music after his release in 1994.

His latest album of original material I'll Never Get Out Of This World Alive was released in 2011. Songfacts reports that one of the tracks, This City, got played on HBO’s New Orleans based show Treme several months before the album‘s release. Earle, who plays a recurring street musician, composed the song especially for the drama series.