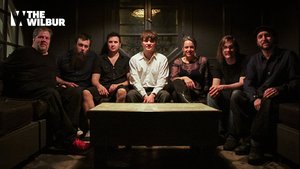 Start Making Sense are selling out rooms throughout the eastern half of the United States. This band is a huge hit as the Talking Heads are never on tour, and the band’s amazing dedication to the music and fun loving attitude has proven to be a favorite at clubs and festivals.

If David Byrne is one of the geniuses of modern times, then Start Making Sense is a tribute to genius. The musicians in this 7-piece Talking Heads Tribute take pride in faithfully recreating the music of Talking Heads entire career, including songs Talking Heads never performed live! Together they bring much of the Heads unique live show to the stage, with front man Jon Braun as a spot-on David Byrne, some have said this is the closest thing you’ll get to seeing Talking Heads again

About SeepeopleS:
The anti-genre indie pranksters SeepeopleS have been a band for 17 years. The band, which is the brainchild of bandleader/songwriter/producer Will Bradford, has released 5 full length albums and 2 EPs on their own imprint, RascalZRecordZ. It would be an accurate statement to say that there isn't a single band on the planet that covers as much ground musically, or traverses through as many musical universes as SeepeopleS does. Musicians have long since taken notice and members of Morphine, Spearhead, Dave Matthews Band (Tim Reynolds), and even members of Parliament/Funkadelic and Lynyrd Skynyrd are featured on previous albums. All seven records were co-produced by Will Holland (Pixies, New Pornographers, Dead Can Dance) The band has toured ceaselessly, playing over 1500 shows in 46 states during their long career. Most importantly, SeepeopleS features songwriting that is the definition of timelessness and lyrically have been busy writing the most important musical anthems of our generation. It may be long after our lifetimes before this band gets their due, but they certainly will. Nothing this good can remain hidden forever.