Starr Forum: Reign of Terror: How the 9/11 Era Destabilized America and Produced Trump 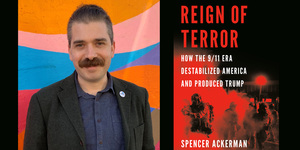 Open to the MIT community on covid pass and open to the public with Tim Tickets (registration required).

Please register if you would like to attend in-person. No registration necessary for the live-stream/virtual event - view the webcast at https://bit.ly/AckermanWebcast

A book talk with Spencer Ackerman, national-security correspondent for The Daily Beast

A union of journalism and intellectual history, Reign of Terror is a pathbreaking and definitive book with the power to transform how America understands its national security policies and their catastrophic impact on its civic life.

Spencer Ackerman has worked as a national-security correspondent for nearly the entire War on Terror. He has worked for The New Republic, WIRED, The Guardian and currently The Daily Beast. He has reported from the frontlines of Afghanistan, Iraq, and Guantanamo Bay. He shared in the 2014 Pulitzer Prize for Public Service Journalism for Edward Snowden’s NSA leaks to The Guardian, a series of stories that also yielded him other awards, including the Scripps Howard Foundation’s 2014 Roy W. Howard Award for Public Service Reporting and the 2013 IRE medal for investigative reporting. Ackerman’s WIRED series on Islamophobic counterterrorism training at the FBI won the 2012 online National Magazine Award for reporting.

Steven Simon is the Robert E Wilhelm Fellow at the MIT Center for International Studies. He has served as the National Security Council (NSC) senior director for the Middle East and North Africa during the Obama Administration and as the NSC senior director for counterterrorism in the Clinton White House. His academic appointments include: the John J McCloy ’16 Professor of History at Amherst College, lecturer in government at Dartmouth College, and most recently as Professor in the Practice of International Relations at Colby College. Simon is the co-author ofThe Age of Sacred Terror (Random House, 2004), winner of the Arthur C. Ross Award for best book in international relations and of The Next Attack (Henry Holt, 2006), a finalist for the Lionel Gelber Prize, and one of the “best books of the year” in the Washington Post and Financial Times, which focused on the US response to 9/11.

The book, Reign of Terror, will be sold at the event by The MIT Press Bookstore. A book signing will follow the talk.