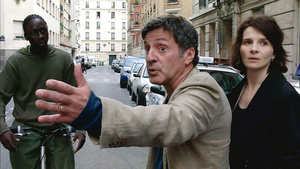 Caché, titled Hidden in the UK and Ireland, is a 2005 French psychological thriller written and directed by Michael Haneke. Starring Daniel Auteuil as Georges and Juliette Binoche as his wife Anne, the film follows an upper-class French couple who are terrorized by anonymous tapes that appear on their front porch and hint at childhood memories of the husband.

Caché opened to acclaim from film critics, who lauded Binoche's acting and Haneke's direction. The ambiguities of its plot continue to attract considerable discussion among scholars; many have commented on the film's themes of "bourgeois guilt" and collective memory, often drawing parallels between its narrative and the French government's decades-long denial of the 1961 Seine River massacre. Caché is today regarded as one of the greatest films of the 2000s.