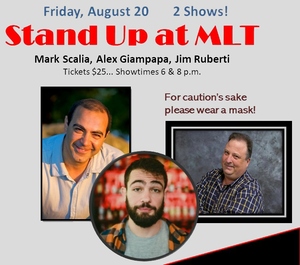 Stand Up Comedy at MLT is presented by MLT and Scamps Comedy Productions, which has produced other notable stand-up shows including Steve Sweeney’s one-man show Townie and New Year’s Eve shows in 2018 and 2019.

Due to public health concerns, the audiences for both shows will be limited to 50
patrons. Showtimes are 6 p.m. and 8 p.m., and tickets are $25, available at Arnold Gallery and Framery, 111 Washington Street, and online at MLTLive.com and at ScampsComedy.com.

Headliner Mark Scalia, who lives in Salem, is a headlining comedian but many local people may know him best for his acting performances on local stages, or on the Salem Trolley during the holiday season. As a comedian, he has headlined across the United States and Canada at major comedy clubs, numerous colleges and universities, along with corporate, private, and religious venues. He has also performed at The Boston International Comedy Festival, Seattle International Comedy Festival and the New Orleans Comedy Festival. He's also performed standup with the show How Men Think (Or Do They?).

“The nicest cynic you'll ever meet," Alex Giampapa began performing stand up in Boston at the age of 19 and became a popular act across New England. Now splitting time between Boston and New York City, he’s shared the stage with legendary comedians such as Bill Burr, Hannibal Buress, and Gary Gulman as well as opening for Adam Devine and Erik Griffin of Workaholics fame. A 2018 selection for both the Big Pine Comedy Festival in Flagstaff, AZ and The Boston Comedy Festival, he's also competed in The World Series of Comedy, was a three-time finalist in The Beantown Comedy Riots, and has been featured in The Salem Comedy Festival (Salem, MA), The Motor City Comedy Festival (Detroit, MI) and The Mutiny Radio Comedy Festival (San Francisco, CA).

Jim Ruberti is a Boston comedian and actor who hosts Summer Comedy with Jim Ruberti & Friends at the Cotuit Center for the Arts. He has been entertaining people for over 30 years, starting as a child in the theaters of Cape Cod performing with Broadway actors such as John Raitt or Theodore Bikel. He has been a comic fundraising auctioneer and event host for more than 10 years, and a stand-up comedian working stages around New England. As a stand-up, he’s shared the stage with Boston headliners such as Lenny Clarke, Christine Hurley, Steve Sweeney, Paul Nardizzi, and Jimmy Dunn.

“This is going to be so much fun it’s ridiculous,” says Ruberti, who lives in Barnstable.
“For someone from the Cape, there’s nothing more enjoyable than the ride up the coast
through Boston on a Friday afternoon, waving at all the cars going in the opposite
direction.

“Marblehead is wonderful, and the show will be great. Alex and Mark are both very funny, and we’re all very different from each other. The audience is guaranteed to have a great time."