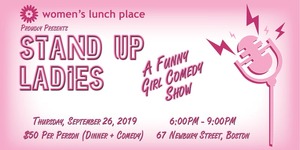 Join us for an evening of laughs, dinner, drinks and a raffle!

Julie Nolan returns to Women's Lunch Place for another funnybone-tickling night of comedy on September 26. Joining her this year is Amy Tee, a hilarious performer, delivering comedy with stigma-busting honesty.

Join us for a delicious buffet and evening of laughter and outrageous humor.

Patty Gould
Born and raised in Boston’s little neighborhood of Charlestown, Patty Gould is just back from The Portland Maine Comedy Festival. Affectionately known as FPG, she can be found around New England on any given weekend performing with the best of Boston’s comics to raise funds for worthy individuals and causes in need. This “glass half-filled” widowed, empty nest baby-boomer will delight you with the tales of the second act of FPG.

Julie Nolan, Host
Julie has been the host of her own talk show now in its 9th season in her hometown of Melrose MA on MMTV. She began stand-up comedy at an open mic night at Giggles in 2015 and has not stopped since. In Boston, Julie has performed at Giggles, Kowloon, and Laugh Boston. She has been the headliner at JJ Grimsby's in Stoneham since 2017. Julie resides in Melrose with her husband Fran and her two children Frankie and Danny Nolan. Julie spearheaded the first Stand Up Ladies Comedy Show and WLP is grateful she has returned for a second year!

Amy Tee
“Not every crazy looks crazy,” says Amy Tee, who brings her boyish charm and dry wit to the stage with a storytelling style that shifts between stereotypes and reality. Amy has toured nationally and has been featured in the Boston Globe, Curve Magazine, and the film Laughing Matters-The Next Generation. As an official IOOV (In Our Own Voice) Presenter for National Alliance on Mental Illness (NAMI), Amy Tee proudly uses her comedy act to serve as a mental wellness advocate. She remains a fixture on the comedy circuit, is a regular performer at the Boston Comedy Festival, and has been featured on Sirius XM Satellite Radio & LOGO television network.

Proceeds benefit Women’s Lunch Place, which provides a safe, welcoming day shelter community providing nutritious food and individualized services for women who are experiencing homelessness or poverty. We meet our guests where they are and treat them with dignity and respect.

For more information about the event, please contact Chloe Kimball at Chloe@womenslunchplace.com or (617) 449-7208.