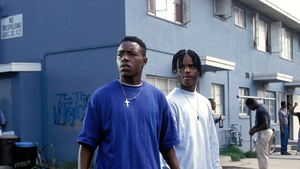 After growing up in turmoil and violence of the Los Angeles projects, 18-year-old Caine Lawson (Tyrin Turner) wants a way out.

Everyone around him, including his unpredictable friend O-Dog (Larenz Tate), is trapped in their lives of crime and violence. With the help of his caring teacher (Charles Dutton) and supportive girlfriend (Jada Pinkett Smith), Caine plans to leave the city for good. But in a series of tragic events, Caine realizes that escape will not be easy. Directed by Allen Hughes and Albert Hughes. 104 minutes.

Tickets to the Huntington’s production of Topdog/Underdog (March 10 – April 9 at the Avenue of the Arts / BU Theatre) are available at huntingtontheatre.org.