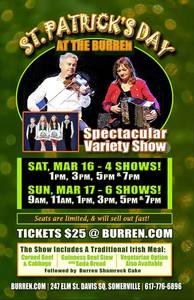 The 9am & 11am shows we added last year were a hit, so we're doing it again this year for those of you who want to get the festivities off to an early start. In addition to the above meal option, we are offering a choice of a traditional Irish breakfast for these two shows.

Tommy McCarthy and Louise Costello are traditional Irish musicians who have performed with many of the trad genre's elite including: The Chieftains, Michael Flatley, Sharon Shannon and many more. They are also owners of the Burren, which, since its opening in 1996, is considered the premiere venue for for traditional music in the U.S.

The Burren has received numerous awards for Best Irish Bar and has live music almost every night. Seats are limited & are sure to sell out FAST, so get your tickets now!