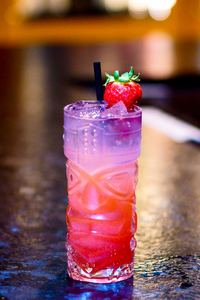 During the month of May, Sumiao Hunan Kitchen in Cambridge’s Kendall Square will showcase the flavors of spring through a duo of cocktail specials that spotlight two of the world’s most celebrated spirits: baijiu and caćhaça.

STRAWBERRY-BAIJIU SPRITZ:
Although rare in the United States, baijiu is the most widely consumed spirit in the world making this twist on a spritz a must-try spring sip. With the unexpected spike of the baijiu incorporated, Sumiao Hunan Kitchen takes it one shake further by replacing the typical white or rosé wine with a plum wine. The base liquors are rounded out by the subtle sweetness of lychee, housemade strawberry puree and ginger liqueur that is finished with soda water and served in festive tiki glassware ($12).

ROSEMARY CAIPRINHA:
With Sumiao Hunan Kitchen’s beverage program taking inspiration from the top cocktail cities in the world, the second May feature is the Rosemary Caipirinha. The national cocktail of Brazil, caipirinhas incorporate caćhaça which is the most common distilled alcoholic beverage in the South American country. SHK’s take on this classic blends fresh lime, homemade rosemary syrup and caćhaça that is shaken vigorously and strained into a glass of ice and garnished with a fragrant rosemary sprig ($9).