Speedy Ortiz with Tera Melos, And The Kids 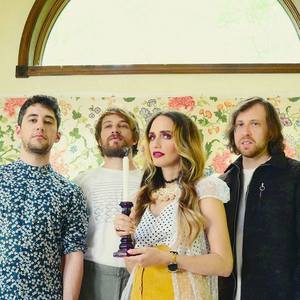 Attention came swiftly following Speedy Ortiz’s 2012 Sports EP on the Boston-centric label Exploding In Sound, and with good reason. Massachusetts-based songwriter/guitarist Sadie Dupuis’ knotty, lyrically dense songs were fully realized by her bandmates, with intricate guitar lines crisscrossing over Darl Ferm’s fluid bass and Mike Falcone’s precisely executed drumming in a way that was simultaneously catchy and jarring. After the success of its 2013 Best New Music-honored debut full-length Major Arcana, the band formalized its assault through a year and a half of relentless touring with bands in whose brainy-slash-brawny legacies it followed—among them Stephen Malkmus & The Jicks, Ex Hex, and The Breeders. In 2014, the band added guitarist Devin McKnight of the Boston-based post-punk group Grass Is Green, whose guitar parts both match and challenge Dupuis’.

Speedy Ortiz’s second proper album—Foil Deer, recorded at Rare Book Room in Brooklyn when the band wasn’t pushing forward on its hectic 2014 tour schedule—comes out on April 21, 2015. The songs represent a leap forward, possessing a lightness that mirrors Dupuis’s post-grad school outlook; they also have a deliberate nature to them, one that emanates from extra studio time and more experimentation with the band’s essential form. (Ferm contributes a few unexpected guitar parts; Falcone’s vocal harmonies zing in with more force.) Speedy Ortiz possesses big-tent rock swagger and punk’s restless yet intimate spirit in a way that makes the impulses seem identical; while the quartet can still command crowds at festivals like Primavera Sound and Pitchfork Music Festival, they also relish playing Boston’s teeming basements alongside the city’s next generation of bands. That willingness to push not just forward, but in all directions, makes Speedy Ortiz one of rock’s most exciting outfits.

Growing up, often the safest haven to plot your dreams and get a handle on your identity is within the confines of trusted friendships. For the musicians in the critically acclaimed band And The Kids, these bonds have been a life raft.

But as friendships evolve from adolescence to young adulthood, sometimes the lines between friends, lovers and all that comes in between can grow murky. On the Northampton, MA-based band’s latest, Friends Share Lovers (out June 3rd on Signature Sounds), And The Kids examines blurred boundaries in close-knit relationships.

“The friends we grew up with were troublemakers, lost souls, dropouts, and mother figures,” says And The Kids guitarist and vocalist Hannah Mohan. “The title references the incestuousness of friend groups and how things get messy.”

And The Kids channel existential crises into pop euphoria. With this sleight of hand, the quartet manages to conjure chunky indie rock, blissful new wave, chamber folk, jarring avant-garde, and brawny classic rock. Mohan navigates this expansive creativity with aplomb. Effortlessly she swoops heavenly for high tones, digs deep for swaggering rock n’ roll low tones, and manages to mash up sweet sass with new wave bliss for a vocal feel that masks sage wisdom beneath sweet innocence. In addition to Mohan, And The Kids is Rebecca Lasaponaro on drums, Megan Miller on synthesizers and percussion, and bassist Taliana Katz.

The quartet’s beginnings couldn’t be better scripted: Mohan and Lasaponaro met in band class in seventh grade. A few years later, the duo dropped out of school and found themselves at a learning center that provided them with a free rehearsal space. There they practiced everyday, inspired by such diverse artists as Modest Mouse, Rilo Kiley, The Doors, and The Police, among others.