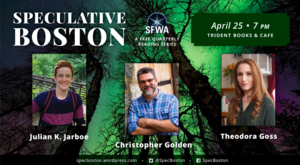 Our next Speculative Boston event will feautre Julian K. Jarboe, Christopher Golden, and Theodora Goss! Read more about each author below.

Julian K. Jarboe lives in Salem, Massachusetts. They are an Associate Editor at PodCastle magazine, a graduate of the Odyssey Fantasy Writing Workshop, and most recently a fellow at the Writers’ Room of Boston, where they also sit on the board. Their writing can be found in The Atlantic, Strange Horizons, The Fairy Tale Review, and anthologized in the LAMBDA award-winning Year’s Best Transgender Speculative Fiction series, among others. They also produce and co-host Mothers & Others, “the podcast about maternal figures and mommy issues.”


Christopher GoldenChristopher Golden is the New York Times #1 bestselling, Bram Stoker Award-winning author of Ararat, Snowblind, Dead Ringers, Of Saints and Shadows, and many other novels. With Mike Mignola, he is the co-creator of two fan favorite comic book series, Baltimore and Joe Golem: Occult Detective. As an editor, his anthologies include Hark! The Herald Angels Scream, Seize the Night, and The New Dead, among others. He has also written screenplays, video games, radio plays, an online animated series, and much more. He lives in Massachusetts.

Theodora Goss was born in Hungary and spent her childhood in various European countries before her family moved to the United States. Although she grew up on the classics of English literature, her writing has been influenced by an Eastern European literary tradition in which the boundaries between realism and the fantastic are often ambiguous. Her publications include the collections In the Forest of Forgetting and Songs for Ophelia; The Thorn and the Blossom, a novella in a two-sided accordion format; debut novel The Strange Case of the Alchemist’s Daughter, and its sequel, European Travel for the Monstrous Gentlewoman. She has been a finalist for the Nebula, Crawford, Locus, Seiun, and Mythopoeic Awards, and on the Tiptree Award Honor List. She has won the World Fantasy and Locus awards.