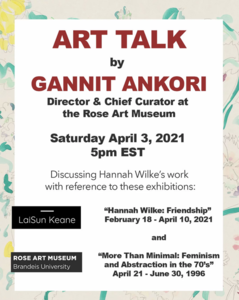 Join us at LaiSun Keane Gallery for First Friday on April 2nd for a final view of our exhibition Hannah Wilke: Friendship.

We will be open late until 8pm practicing social distancing and required face coverings.

For the first time in more than 20 years, LaiSun Keane is thrilled to bring a public exhibition of an exclusive group of works by Hannah Wilke (1940-1993) to Boston titled Hannah Wilke: Friendship. The exhibition which illuminates the friendship between Wilke and Deena Axelrod, will be held at our gallery from February 18 to April 10, 2021. The last time Boston hosted an exhibition of Wilke ’s work was in 1996 at the Rose Art Museum.

Hannah Wilke and Deena Axelrod’s youths were informed by 60s feminism, which was foregrounded by huge social and cultural shifts. Their lives converged in many ways which impacted their family, friends and most importantly, Wilke’s art making. The works in this exhibition show how Wilke’s art and their personal lives were intertwined. Wilke’s art WAS very much her life and it seeps into every aspect, be it through friends and family members or famous lovers.

A pertinent example of the Axelrod’s connection to Wilke’s work is Bar Mitzvah, 1985 which was produced by repurposing Mayan Axelrod’s Bar Mitzvah invitation into her famous chewing gum artwork. Notably, in a beautiful gesture, Wilke re-gifted the work to Mayan hence making it a forever memento for the bond between her and the Axelrod family.

Together with the exhibition, we have the pleasure to include a catalogue essay by Anya Ventura who conducted a lengthly interview with Mayan Axelrod for her piece. In her essay, she discussed the importance of the women’s friendship with tender anecdotes. This allows us to see a side of Wilke in a deeply personal and meaningful way. It is undeniable that Hannah Wilke was very much a formidable force but she had a strong support system in this friendship. Deena Axelrod was there all along, to inspire, to support and to comfort until Wilke’s premature death at 52.