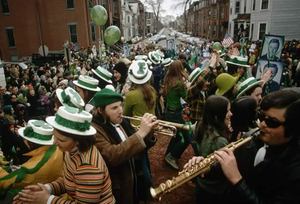 In Boston, St. Patrick’s Day is observed annually with a parade that takes place in South Boston, the city's predominant Irish-American neighborhood. The parade has been a tradition in South Boston for more than 110 years, with the first procession taking place in 1902. It includes various marching bands, police and army contingents, costume spectacles, novelty vehicles, and a general "green" atmosphere due to participants and onlookers wearing green hats and accessories to reflect the association of the color with Irish culture.