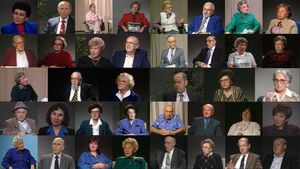 “Soul Witness,” a work-in-progress documentary film by R. Harvey Bravman, returns to the Coolidge after two sold-out 2017 screenings. The film is based on over 80 hours of interviews conducted by world-renowned Holocaust testimony expert Lawrence Langer that had been locked in a metal storage unit for over 20 years.

The event will also feature:

A new video featuring family members of those who gave testimony over a quarter of a century ago and others connected to the original project.
Karen Chase, former director of Brookline Access Television, who will tell the story of how this extraordinary interview project came to be in the early 1990s and the making of the film.
Q&A sponsored by Facing History and Ourselves, moderated by Adam Strom of Re-imagining Migration. Panelists include R. Harvey Bravman, producer/director of Soul Witness, Margot Strom, founder of Facing History and Ourselves, and Janet Stein, president of the American Association of Jewish Holocaust Survivors of Greater Boston and Generations After.