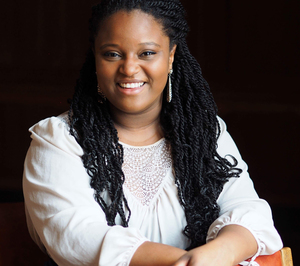 The Emerging Artists of Boston Lyric Opera are among the burgeoning stars of the art form—dynamic, thrilling artists embarking on major careers. Soprano Brianna J. Robinson, a native of Ohio, explores the beauty, heartache, and depth of women in opera and song in this special evening recital, with music from Mozart to 20 th -century composer Undine Smith Moore. Accompanied by BLO Emerging Artist pianist Nathan Salazar.

Soprano Brianna J. Robinson is a graduate of Ohio Wesleyan University with degrees in Vocal Music Performance and Black World Studies. She received her Master’s degree in Performance and Literature from the Eastman School of Music in May of 2018.

Her performance credits include Ms. Nordstrom in A Little Night Music, Penelope Pennywise in Urinetown, Little Red Riding Hood in Little Red’s Most Unusual Day and a lead soloist in Purcell’s The Fairy Queen. She served as a Rising Artist with Pegasus Early Opera in the summer of 2017, playing the role of Witch #1 in Purcell’s Dido and Aeneas. At Eastman, her credits include Massenet’s Cendrillon and Ralph Vaughan Williams’ Riders to the Sea, her Eastman Opera Theater debut as the Empress Ottavia in Monteverdi’s L’Incoronazione di Poppea. She was also involved in Eastman’s Baroque performance ensemble, Collegium Musicum, singing the title role in Caccini’s La Liberazione di Ruggiero dall’Isola d’Alcina and Lead Soloist in Purcell’s King Arthur and The Fairy Queen. She was also a Catherine Filene house Fellow through the Arts Leadership Program at Eastman.

Recent concert engagements include the Brahms Requiem alongside the Rochester Philharmonic Orchestra, Bach’s Ascension Oratorio and Ralph Vaughan Williams’ Dona Nobis Pacem with the Westminster Presbyterian Church of Buffalo. Brianna was a Studio Artist with the Berlin Opera Academy in the summer of 2018, and joined Boston Lyric Opera in the 2018/19 Season as a Jane's Steven Akin Emerging Artist, performing in The Handmaid’s Tale this May.