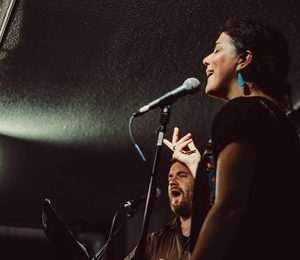 Cambridge-based Sophie et Adam share folk tunes from England, the US, Romania, Argentina, Yiddish songs, French Chansons, and originals by Adam Simon. This concert will focus on music from France, highlighting songs made famous by the famous Edith Piaf. They are thrilled to be joined by the acclaimed Michael McLaughlin at the accordion.

Sophie Michaux was born in London and raised in the French Alps. Although she focuses on classical music, her versatility and musical curiosity have brought her to be an active performer in many repertoires including French Cabaret songs, English Sea Shanties, as well as a variety of world polyphonies: in 2014 and 2017, she toured the U.S and Europe with Northern Harmony. She was one of the lead singers in the 2018 Cambridge Christmas Revels, alongside VH leaders Gideon Crevoshay and Lysander Jaffe: Venetian Celebration. She is the founding member of Sophie et Adam, a folk music duet, and of Culomba, a world music ensemble.

Adam Jacob Simon is a composer, baritone and guitarist active in the Boston area. He is an avid folk music singer as well, performing frequently with VT based vocal ensemble Northern Harmony, traveling throughout Europe, South Africa and the U.S. As a baritone soloist, he has been praised as singing with “wonderful romantic lyricism” and “reassuring warmth” – Rutland (VT) Herald. As co-founder of the folk music duo “Sophie et Adam” alongside French mezzo-soprano Sophie Michaux, he frequently performs a varied repertoire of French, American, and Yiddish folk music.

Michael McLaughlin performs throughout the U.S. and Europe playing the music of klezmer, Americana, and jazz. His works have been used for film, stage and public radio, and his compositions have garnished a number of awards including a Mass Cultural Council Artist Grant in 2001. His recordings can be found on the Accurate, Tzadik, Elipsis Arts, Knitting Factory Records, Rykodisc, and Innova labels.