Something Big Comedy with John Conroy 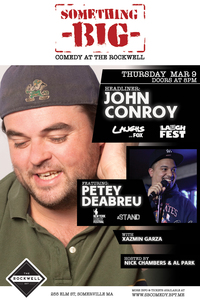 Hosted by Nick Chambers and Al Park, “Something Big” is a monthly comedy showcase bringing some of the country’s best stand-up comedians to perform at Somerville's intimate venue, The Rockwell.

March's headliner, John Conroy, D.C. native, brings an everyman's attitude to smart, sharply written material that runs the gamut from shrewd observations to social satire. Shortly after relocating to Minnesota, his peers voted him “2008 Best New Comic in the Twin Cities”. Over the next few years he made a rapid transition from opener to headliner, playing hundreds of shows each year and touring the top clubs throughout the country. Conroy is a jovial iconoclast whose good-humored but aggressive act makes a lasting impression.

Repping the streets of the Bronx NY, feature comedian Petey DeAbreu is a fast-rising star on the New York City comedy scene. He has appeared on TruTv and is a regular at comedy clubs all over the city. Petey loves to take crowds on unexpected journeys and believes his feel-good style cuts through prejudice and provokes laughter without boundaries.