Solving 9/11: The Deception that Changed the World 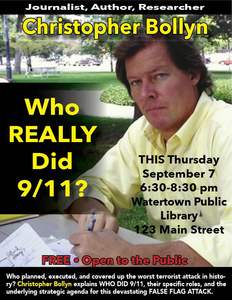 Who really did 9/11 and why!
What is the War on Terror?
When will it end?
"If you're an American, you ought to be concerned about the strategy of the United States in the Middle East. What is our aim? What is our purpose? Why are we there? Why are Americans dying in this region? That is the issue."
- General Wesley Clark, October 3, 2007

Christopher Bollyn, author of Solving 9/11, will be speaking about his new book, The War on Terror: The Plot to Rule the Middle East.

The government and media have misled us about 9/11 in order to compel public opinion to support the War on Terror, the longest and most expensive war in American history.

Under the pretext of fighting terror, the war is meant to redraw the map of the Middle East. 9/11 was a false-flag operation blamed on Muslims in order to start military operations for that strategic plan. Recognizing the origin of the plan is crucial to understanding the deception that changed our world.