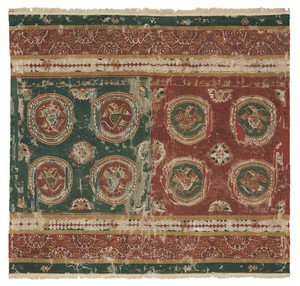 Discover what textiles made and worn in medieval Egypt tell us about connection and belonging in a diversifying world.

From swaddling newborns to enshrouding the deceased, woven fabrics touch nearly every aspect of human existence. The textiles in this exhibition are particularly meaningful, for they tell a bigger story about political and social power, class, trade, and concerns for the afterlife during a transformative period in Egyptian history. In the medieval era, control of the region shifted repeatedly, as Egypt was subsumed under a sequence of empires—Byzantine, Umayyad, Abbasid, and Fatimid—and the majority religion gradually evolved from pagan to Christian to Muslim. The textiles in Social Fabrics record the material and cultural impacts of these transitions, including the exchange of weaving and embroidery techniques, the availability of new fabrics and fibers, and interactions among people of different faiths.

The exhibition’s core fabrics date from the ninth through twelfth centuries and feature Arabic inscriptions. Most were produced in Egypt and belong to the prized category of tiraz textiles. Bearing state-controlled inscriptions, tiraz represent a privileged network headed by the caliph, the temporal and spiritual ruler of the Islamic world. They were distributed not on the open market, but as gifts to favored courtiers and officials. Yet also presented are a range of textiles made for different communities that merely emulate court fabrics. Taken together, these objects trace the diversity and stratification of medieval Egypt.

Although removed from their original environments, the fragments remain vital social fabrics, revealing the circumstances and aspirations of their owners and the remarkable resilience and artistry of their makers. Speaking across centuries, they invite us to consider the ways in which we structure society and how we organize and announce our social relations.