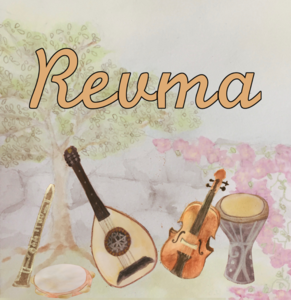 REVMA passionately displays the living art of traditional Greek music (“Dimotika”), to listening and dancing audiences. Mesmerizing pentatonic and polyphonic Epirot mountain laments and celebrations, lyrical melodies and the “springing” sousta and ballos dances of the Aegean, Dodekanese, and Ionian islands, powerful odd-metered Macedonian and Thracian rhythms, and the delicate modal tones of urban Smyrnaika, are all shaped by a history drenched in struggle, war, migration, resilience, and philotimia, and charged with Greek life-embracing passion and wit. Our musicians are: Rohan Gregory on violin, Glenn Dickson on clarinet, Fabio Pirozzolo on percussion, guitar, and voice, and Sandy Theodorou on laouto, accordion, and voice.

Gogofski plays music of the Balkans. Not the loud and fast brass of Goran Bregović. Not the massive thirty-voice choir of Mystère des Voix Bulgares. We bring you other great music from the Balkans, from the complex dance rhythms of Macedonia to the heart-wrenching Sevdah song tradition of Bosnia.

Gogofski plays for a dance evening the way they do in the old country: the musicians on the floor playing right in front of you, to you, for you. A Gogofski club evening gives you a feast of comic songs and intimate ballads, traditional and modern, and brings you to understanding, to sharing, and to feeling. And at an outdoor festival, Gogofski brings a new sound and a new excitement that brings the audience out of their seats to dance in front of the stage. Gogofski is Kasia Sokalla, David Golber, Gawain Thomas, and Henry Goldberg.

Kasia Sokalla studied voice in her native Poland, and graduated with honors from the Berklee School of Music.

David Golber has been playing Balkan-style clarinet for decades. He speaks Macedonian, and has studied in the Republic of Macedonia with Risto Krapovski, Bajsa Arifovska, and others.

Gawain Thomas comes from a musical family, and began playing accordion at an early age. He has studied for years with Bulgarian maestro Ivan Milev, and is well-known in Boston’s Balkan music scene.

Henry Goldberg is a true master of the Balkan drum tapan. When the Bulgarian group Kabile came on tour to Boston, they were traveling without a tapan player. Henry stepped in and played with them, seamlessly and completely in style.