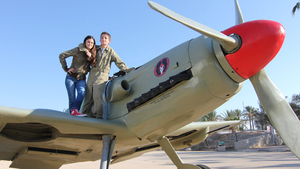 An uplifting adventure feature film for the entire family. 13-year-old Yotam is obsessed with flying but his overprotective mother won’t let him anywhere near planes. His classmate Noa loves planes too, but her brother won’t let her close to the ones he fixes. So when Yotam and Noa find a rare antique plane in the local junkyard, they decide to fix it up themselves -- with a little help from Morris, a very grumpy 80-year-old who used to be a pilot. Together they are determined to bring this rusty old plane back to life and to show it off at the Annual Air Show.