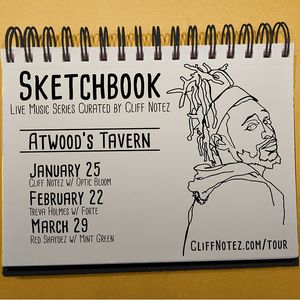 Atwoods Tavern is a venue that has traditionally presented folk, roots, and americanathis is a major step forward in greater Boston venues making space for the growing hip hop community. Atwoods Tavern has partnered with award-winning musician, filmmaker, and organizer Cliff Notez to curate the series. Rooted in hip hop, Cliff Notez music tackles the political and the personal, exploring the intimate consequences of a society where black bodies are easily ignored, forgotten, or disregarded. Notez is a Dorchester native and the co-founder of the Boston media collective Hipstory. His debut solo album "When the Sidewalk Ends" was released in 2017 and is available on Spotify and Apple Music. In December 2018, Cliff Notez won a Boston Music Award for New Artist of The Year and looks forward to a national tour in 2019.