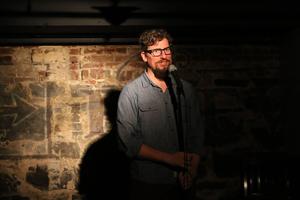 Where:
https://sit-down-comedy.eventbrite.com Arts at the Armory
191 Highland Avenue, Suite B-5
Somerville, MA 02143

About the Class: Have you ever thought about trying stand-up comedy? Or do you want to take your stand-up and comedy writing to the next level? This workshop will help you find your inner comedic voice, whittle down to find the funny, or punch-up what already is. This is a four part series that covers the writing, performance, and business aspects of comedy. Each class is an hour and a half, and students should bring a pen and paper to each session.

About the Instructor: Josh Filipowski has produced and performed in countless stand-up comedy shows nationally and internationally, produced projects for NBC, and contributed to The Howard Stern Show on SiriusXM & The Complete Idiot's Guide to Jokes (Alpha/Penguin). He founded Like 2 Laugh Productions in New York in 2003 and has helped comedians develop in New York, Los Angeles, Lexington, Costa Rica, Italy and beyond. Besides the stage, he has hosted radio and live-stream programs as well as appeared on ABC's Noon Show, NBC's Today in LA and NBC's Law & Order: Criminal Intent.