Singles in 35mm + The Fabulous Stains in 35mm 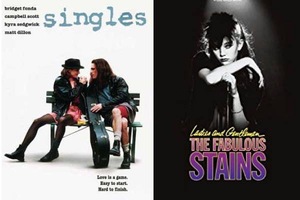 Singles:
“This negativity just makes me stronger, we will not retreat, this band is unstoppable!” -Matt Dillon as Cliff

Cameron Crowe captures another musical moment in time, the 90’s Seattle “grunge” scene. He was inspired by the Seattle subculture and how they supported each other, particularly after the death of Mother Love Bone’s singer. The film was already in production when the grunge scene became a mainstream sensation. The soundtrack predated the movie and was an instant hit.. the film, less so.

Singles is one of a handful of 90s movies that illustrate the Gen X themes of being in your early 20s, single, and a bit lost. As seen in Almost Famous, Cameron Crowe’s theme of finding your scene and your place in it resonates here too.

Citizen Dick is the fictional band led by Matt Dillon. His bandmates are Eddie Vedder and Jeff Ament of Pearl Jam. Ament wrote all the fake song titles for Citizen Dick. Fun Fact: these fake titles inspired Chris Cornell to write his own songs for each of the titles, one of which was.. Spoonman. We all remember Spoonman! The breakout hit of the soundtrack was Screaming Tree’s “Nearly Lost You”. Musical contributions by Paul Westerberg, cameos by Chris Cornell and Alice in Chains all gave Singles the cred it needed (if it is deserved remains debatable) The 90’s were an exciting time for the rise of indie bands and indie films, and Singles reminds you of that brief but impactful time.

Whether or not you were around in the early 90’s, enjoy the abundant flannel and revel in the dating trials without the existence of cell phones or the internet. The dating burnout, of course, is timeless

Ladies and Gentlemen the Fabulous Stains

"I’m perfect! But nobody in this shithole gets me, because I don’t put out!" -Corinne Burns to audience

I had heard of this film as a cult, midnight-movie type favorite, and only recently saw it for myself. It is thoroughly enjoyable and way more “legit” than I was expecting. With its timeless feminist and riot grrl leanings, The Fabulous Stains still feels relevant and necessary in 2019. The Stains are an all girl band consisting of Corinne Burns aka Third Degree Burns ( played by a young Diane Lane), sister Tracy Burns (Marin Kanter) and Jessica McNeil (played by a young Laura Dern)

Nancy Dowd wrote it, and was harassed by crew members during filming and left so disheartened that she took her name off the project (It’s listed as written by “Rob Morton”).

It was produced by Lou Adler, whose music credits are so wide ranging and legendary I urge you to look him up. The movie didn’t get a proper release, but gained a cult following after showing up on late night TV shows like 80’s staple Night Flight.

The Stains, a scrappy all girl band, inspire tons of girls suddenly with their iconic sheer red shirt, angular eye makeup, and skunk striped hair. Corinne maxes out her looks and attitude, rallying girls everywhere and terrifying their parents. Once again we see the rapid rise, fall, and redemption of a band.

The Looters are a fictional UK punk band, slogging away at small American gigs opening for the washed up band The Metal Corpses ( which features the singer and guitarist of the real band The Tubes). The Looters features Steve Jones and Paul Cook of the Sex Pistols. The snarling frontman clearly took inspiration from his very real backing players.

I don’t want to spoil any of the movie, but will say my favorite scene is when The Stains take to the stage and do an unexpected cover to wild approval of fans, and utter shock of the original performers of said tune.