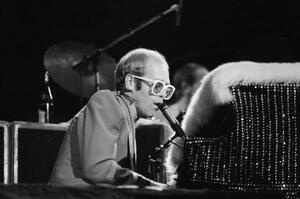 Join an eclectic cast of student performers for a thrilling evening of live music celebrating one of the most beloved voices of all time, the living legend Sir Elton John. Produced by Maureen McMullan '09, this concert will showcase some of Berklee's most outstanding singers, instrumentalists, dancers, arrangers, and track producers as they pay homage to John's artistry and time-honored catalog, including chart-topping hits "Your Song," "Bennie and the Jets," "Rocketman," "Tiny Dancer," "Philadelphia Freedom," "Don't Go Breaking My Heart," "Candle in the Wind," "Can You Feel the Love Tonight," and "I Guess That's Why They Call It The Blues," to name but a few.

Ranked by Billboard as one of the top five greatest artists of all time, John has shaped the popular musical landscape and the living soundtrack for millions around the world. Born Reginald Kenneth Dwight in England in 1947, John's first hit, "Your Song" would catapult him to a career spanning six decades, with 300 million records sold and a knighthood from Queen Elizabeth II. Beyond his radio hits, John went on to compose for The Lion King soundtrack, winning the Academy Award and Golden Globe for best original song ("Can You Feel The Love Tonight"). Later, Broadway beckoned, leading to critical and commercial success for the productions Billy Elliot the Musical and Aida (which netted John his first Tony Award for Best Original Score). Away from the stage, John has also paid it forward by mentoring many pop superstars in the early and critical junctures of their careers, including Lady Gaga, Ed Sheeran, and Eminem.

John also was among the first popular entertainers to come out publicly as a gay man. He remains a hero and icon to the LGBTQ+ community and beyond for his steadfast support of equal marriage. Having overcome bulimia, substance abuse, and other personal struggles, John is a tireless advocate of global health programs, and through his Elton John AIDS Foundation has raised more than $400 million to date. The movie Rocketman (2019) chronicles John's life and won John a Golden Globe for Best Original Song for "(I'm Gonna) Love Me Again." This followed his decision to retire from the road after his upcoming Farewell Yellow Brick Road Tour, which will consist of more than 300 concerts worldwide.