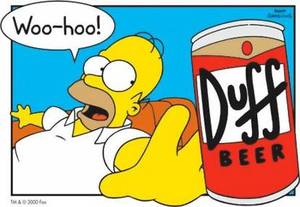 We're tired of being wannabe Simpsons Trivia hosts. WE WANNA BE SIMPSONS TRIVIA HOSTS! We're combining our twin loves for The Simpsons and hosting weird niche trivia (and buying unsettling, terrible themed prizes for said trivia) (and also beer) so we're gatherin' our gumption and puttin' on a shindig, we is!

We'll mostly be focusing on classic-era stuff (up to season twelveish) with questions that space a range of difficulty (though we'll probably shy away from the "dude who memorized the DVD commentary" kind of nerdiness).

So come on out! There'll be snacktacular treats and prizes and a special themed beer release!

Since 2016. husband and wife brewing duo Jared and Liz Kiraly have been releasing fresh new beer every week from their 3-barrel nano brewery. Inspired by old-school Belgian farmhouse brewing while celebrating American styles, their ales combine the heart and soul from each of these beloved beer cultures. Four year round beers are always available, but the gears of Bone Up are always turning, so you can expect an ever-changing array of one offs, seasonal releases, and experimental batches. Located in the heart of Everett's Fermentation District, the taproom features full pours, flights, and growlers from twelve rotating tap lines. Bar snacks are always available!

In addition to a weekly cask, the taproom hosts games and an ongoing series of food vendors and pop ups. Outside of the occasional tasting, the best place to find Bone Up is right at the source!