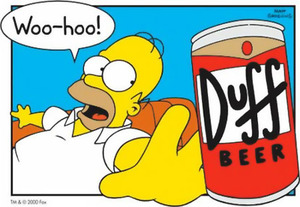 We're tired of being wannabe Simpsons Trivia hosts. WE WANNA BE SIMPSONS TRIVIA HOSTS! We're combining our twin loves for The Simpsons and hosting weird niche trivia (and buying unsettling, terrible themed prizes for said trivia) (and also beer) so we're gatherin' our gumption and puttin' on a shindig, we is!

We'll mostly be focusing on classic-era stuff (up to season twelveish) with questions that space a range of difficulty (though we'll probably shy away from the "dude who memorized the DVD commentary" kind of nerdiness).

So come on out! There'll be snacktacular treats and prizes and a special themed beer release!

Located in the heart of Everett's bustling Fermentation District, the taproom is open Wednesday through Sunday and features full pours, flights, and growlers from twelve rotating tap lines. In addition to a weekly cask, the taproom hosts games and an ongoing series of food vendors and pop ups. Outside of the occasional tasting, the best place to find Bone Up is right at the source!