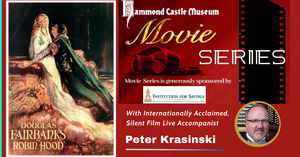 The swashbuckling Douglas Fairbanks stars with Wallace Beery in one of the most expensive movies of the 1920s (and the first to have a glitzy Hollywood premiere). The swashbuckling Fairbanks plays the dashing Earl of Huntingdon, who, after returning from the Crusades, adopts the moniker Robin Hood in order to defeat the treacherous Prince John, who has usurped the throne of the kind King Richard the Lion-Hearted.