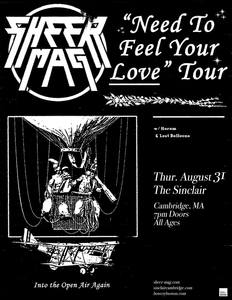 The mythos of Sheer Mag begins like so many other celebrated rock ‘n roll bands of yore: with two brothers. Following in the tradition of The Bee Gees, Oasis and The Allman Brothers, the brothers Seely conspired to create a rock ‘n roll band to end all rock bands. The sheer magnitude of the endeavor required the recruitment of a daring drummer, a fearless lyricist and a diva who could party good AND write the rent check. With the pantheon assembled, MAG quickly recorded and released their debut 7” to cosmic acclaim. The band now stands poised on the brink of world domination or complete destruction. Is it Punk? Is it Rock ‘n Roll? We’ll leave that to the music “critics.” But it is punk.