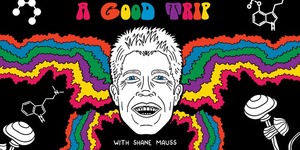 Hideout Comedy and Boston Comedy Festival are teaming up to bring you ‘A Good Trip’ by Shane Mauss! Doors will open at 7:30pm and show at 8pm sharp. Seating is first come, first serve and not guaranteed. For guaranteed seating please arrive as early as possible.
‘A Good Trip’ is an informational comedy show about psychedelics that became a massive 111-city tour in 2016-17. That tour inspired the documentary ‘Psychonautics: A Comic’s Exploration of Psychedelics’ which is available on Amazon Prime. The documentary combines perspectives of some of the top scientists with my own personal journey.

tix:
https://www.eventbrite.com/e/shane-mauss-at-hideout-comedy-tickets-76287723635
----
About me: I’ve been a professional stand-up comedian for over 15 years. In the first half of my career, I followed the traditional comedy path. I did Conan 5 times, had several Comedy Central appearances, as well as doing Showtime and Jimmy Kimmel. Midway through my career I moved toward pursuing my natural curiosities with my science podcast ‘Here We Are’. Each week on ‘Here We Are’, I interview scientists around the world about the meanings of life. I’ve enjoyed combining science and comedy so much that I now tour full time with my new live show ‘Stand Up Science’ which combines two comedians and two scientists on each show.
About the show: Years ago, I was inspired to make ‘A Good Trip’ because I had been exploring psychedelics for over 20 years and wanted a platform to talk intelligently about the incredible impact they have had on my life and all of the possibilities modern research seems to be revealing. Psychedelics are also the source of some of the most hilarious, thought-provoking, and well-received material of my career. I’ve worked very hard to put together a one-of-a-kind show for the open-minded, insightful, inquisitive, curious weirdos among us and it’s been rewarding to see people connect with the show and meet other likeminded people in their community.
This 90-minute solo show is 1/3 stand-up about psychedelics, 1/3 funny stories of experiences, and 1/3 science talk. I will take us on a funny and enlightening journey through the stigma, history, laws, and science of psychedelics. I will share personal experiences and talk about the effects of substances like mushrooms, LSD, and DMT. And don’t worry if you aren’t familiar, I’ve worked hard to articulate the experience for all. Many people that have seen the show have come back with family, friends, and others who they wanted to better understand the world of psychedelics.
My hope is that I’m helping to educate, destigmatize and demystify in fun way. I am an advocate for psychedelic studies and rights. I’m in no way encouraging everyone to do them. They aren’t for everybody. They just happen to be for me!
‘A Good Trip’ has been heard about on Marc Maron's WTF, Pete Holmes' You Made It Weird, The Duncan Trussell Family Hour, This Past Weekend with Theo Von, The Joe Rogan Experience, Bertcast, Ari Shaffir's Skeptic Tank, Cracked Podcast, Put Your Hands Together, Doug Loves Movies, and more.
The 111-city tour was meant to be a one-off tour. But I have never gotten so many requests from people to bring it back to the area. So, I’m doing a very limited number of cities one last time. This will be your last chance to see this show in its entirety.