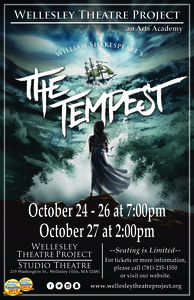 A storm’s a-brewin’ at Wellesley Theatre Project (WTP) with William Shakespeare’s THE TEMPEST running Thursday, October 24th, Friday, October 25th and Saturday, October 26th at 7pm and Sunday, October 27th at 2pm. All performances will take place at the Wellesley Theatre Project Studio Theatre at The Wellesley Community Center, located at 219 Washington St.Wellesley Hills, MA 02481. Tickets are priced $15 for adults and $10 for students and seniors, and may be purchased online at http://wellesleytheatreproject.org in advance, or at the door for $18 for adults and $12 for students and seniors.

THE TEMPEST, one of the last plays written by William Shakespeare, takes place in a single day on a deserted island. Twelve years prior, Prospero was Duke of Milan, but left the management of his state to his brother Antonio, who took control of Milan himself, and sent Prospero and his baby daughter Miranda out to sea.  Now, an angry Prospero seeks revenge - using his powers, with the help of the spirit, Ariel, to create a powerful storm that shipwrecks a boat carrying Antonio and some of his family and friends on an island.  What will happen to the characters on the island? Will Prospero get his revenge? Will his daughter, Miranda, find love? Will anyone make it out alive? Join WTP to find out!

Wellesley Theatre Project is an arts academy and a Wellesley nonprofit devoted to providing students (PreK - 12th Grade) with the opportunity to study and experience theatre and performing arts through year round classes, staged productions, workshops and summer camps. Upcoming WTP performances include Frozen, Jr., December 13th-15th at Babson College’s Sorenson Center for the Arts. Tickets for Frozen, Jr. are also available at http://wellesleytheatreproject.org.

For more information about THE TEMPEST or other Wellesley Theatre Project classes and productions, please visit www.wellesleytheatreproject.org or call 781- 235-1550.