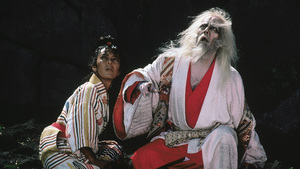 The plays of Shakespeare have been translated into more than 100 languages, and his timeless stories have inspired great works in many art forms. Commonwealth Shakespeare Company and the Coolidge Corner Theatre are teaming up to take an in-depth look at how some filmmakers have reimagined Shakespeare’s work to create compelling cinema that is as relevant today as it was 400 years ago.

Ran is a 1985 reimagining of the story of King Lear, directed by renowned Japanese filmmaker Akira Kurosawa, in which he reimagines Shakespeare's King Lear as a singular historical epic set in sixteenth-century Japan. Majestic in scope, the film is Kurosawa's late-life masterpiece, a profound examination of the folly of war and the crumbling of one family under the weight of betrayal, greed, and the insatiable thirst for power.

The discussion will feature award-winning actor Will Lyman, who starred in CSC’s production of King Lear in 2015, and Peter Grilli, President Emeritus of The Japan Society of Boston and a well-known specialist on Japanese history and culture. The discussion will be moderated by Wellesley Professor and Shakespeare scholar Yu Jin Ko.