Shakespeare Reimagined: 10 Things I Hate About You 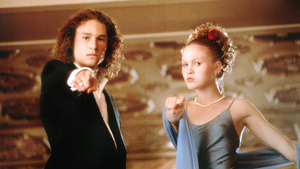 The plays of Shakespeare have been translated into more than 100 languages, and his timeless stories have inspired great works in many art forms. Commonwealth Shakespeare Company and the Coolidge Corner Theatre are teaming up to take an in-depth look at how some filmmakers have reimagined Shakespeare’s work to create compelling cinema that is as relevant today as it was 400 years ago.

The Taming of the Shrew gets a ‘90s makeover in 10 Things I Hate About You, a sharp-witted romantic comedy that launched the careers of Heath Ledger and Julia Stiles. New kid in school Cameron (Joseph Gordon-Levitt) is smitten with the beautiful Bianca (Larisa Oleynik). The problem is that Bianca isn’t allowed to date unless her surly older sister Kat (Stiles) does. Cameron’s only hope is to enlist the help of Patrick (Ledger), the school troublemaker with a reputation as nasty as Kat’s. But the self-assured Kat’s already got a lot on her plate, including an over-protective father, trying to get into a good college, and dealing with classmates who don’t really understand her. Will Patrick and Kat find true love, or will she find more than 10 things she hates about him?

Please note: the Coolidge and CSC are not able to provide direct links to the film, but patrons can find out where to rent and/or stream it here: https://www.justwatch.com/us/movie/10-things-i-hate-about-you.