Shakespeare on the Common: 'Romeo & Juliet' 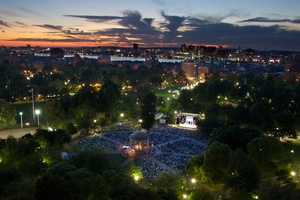 July 19-August 6
Parkman Bandstand on the Boston Common
Performances are free and open to the public.

One of Greater Boston's most beloved traditions, Commonwealth Shakespeare Company's Free Shakespeare On the Common takes up residence once again with Shakespeare’s drama, Romeo & Juliet proving that the power of love triumphs over divisions and differences. The Capulet and Montague families have been engaged in a multi-generational feud, causing much distress and havoc in the city of Verona; but when young Romeo, son of the Montagues, meets Juliet, the daughter of the Capulets, their immediate love blossoms and accepts no barriers, with tragic results.

When:
Tuesday – Saturday performances at 8pm; Sundays at 7pm (Off Mondays). There will be one 3pm matinee performance on Saturday, August 5.

We are proud to be a part of The Highland Street Foundation's Free Fun Friday Program!
Join us on Friday, August 4 from 6:30pm-7pm for a family-friendly demonstration on how actors safely create the illusion of realistic stage combat. This session is appropriate for all ages.

Parking: Parking is available in the Boston Common Garage. Be sure to pick up a discount coupon from one of the CSC tents or from an usher to receive $1 off your parking. These coupons are provided by the Massachusetts Convention Center Authority (MCCA). CSC receives $2 from the MCCA each time a coupon is used.