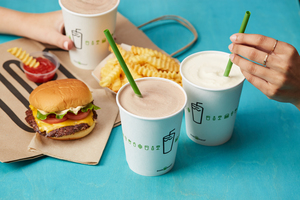 Shake Shack to open doors to newest, and ninth overall, Massachusetts location at Assembly Row in Somerville on Monday, July 5th at 11AM. The Assembly Row Shack will be open daily from 11AM to 10PM.

As part of opening celebrations on Monday, July 5th, LEGO Master Model Builder Sean Martin from neighboring LEGOLAND Discovery Center Boston will be creating Lego versions of the Shack’s iconic menu items during lunch service from 11:30am-12:30pm. Selkii & The Seals will be performing a mix of today’s hits & throwbacks during dinner service from 4:30pm-7:00pm. Selkii is a former contestant on NBC’s The Voice.

The Shake Shack will also be donating $1 to Project Bread for every burger sold on opening day as part of the company’s larger mission to Stand for Something Good®.