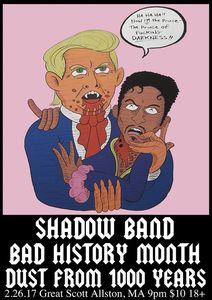 Shadow Band make sounds that move like foggy dreams from fantastical lands. Their patient but powerful songs set in motion a series of refracting echoes that call forth images of medieval battles, spirits unseen by human eyes and the gentle, constant pulsing of the universe

The band formed organically around the songwriting of Mike Bruno, a quiet figure whose vibrant mental landscape is the center of the group’s orbit. Growing up in New Jersey, Bruno immersed himself in a self-made world of gloomy sonic alchemy, honing his songcraft as a solo act in New Brunswick’s small-but-dedicated freak scene. The early years saw Bruno attracting a rotating cast of area heads around his growing arsenal of songs and dubbing it Black Magic Family Band. The sprawling web of artists varied with every gig and recording session, but the roots of Shadow Band started here.

After moving to Philly, a few blurry years passed and key players of the Family Band solidified into a steadfast lineup. Drummer Matt Marchesano and multi-instrumental zoner Sean Yenchick had both played with Mike for years in various formations, as had bassist James Christy. Also in the mix full time was Jacob Brunner, who’d been a long time part of the Weyes Blood crew. The ensemble was rounded out by Michigan-to-Philly transplants Jules Nehring and Morgan Morel. As this core membership developed, the group continued playing on, joined sometimes by auxiliary players when the situation called for it, but now less frequently.

Earlier iterations of the project were only captured on grainy, hiss-heavy four track cassette recordings during all night rituals, leaving a trail of fuzzy, rough-hewn small scale releases. In the beginning stages of working on music for a proper album, the Shadow cohorts entered a studio for the first time to capture a higher-end rendering of their incantations. This quickly proved impossible, and after only a few days, both the band and the label agreed to reverse course.

Progress was made by moving backwards; Brunner, Nehring, and Morel began capturing the sounds of the band as they retreated into their lair. Recording at home over the course of many moons and seasons, Morel gathered the sounds and wove an outpouring of songs that would make up the Shadow Band’s debut album Wilderness of Love.

The result is a fully congealed and creative wave that crests somewhere within the gentle vibrations of the natural world, an ominous psychedelic dream state and the world’s highest game of D&D. Shadow Band sets forth on a journey into the next world, taking their songs of golden sunrise folk and death-knell blues on tour and always cultivating new sounds in their self-made and seemingly limitless world.