Sense The Wind Screening at CBI 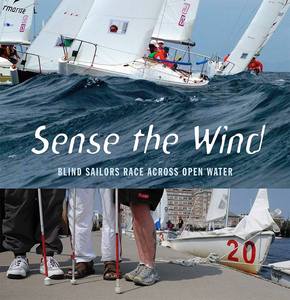 On Wednesday, October 18th, 6:00pm, a filmmaker screening will be held at Community Boating, Inc of Sense the Wind: Blind sailors race across open water. The hour-long documentary will be followed by a Q&A with NY based Producer/Director Christine Knowlton and featured local blind sailors.

Six years in the making, Sense the Wind, follows the journey of four blind sailors as they train and compete in national and international regattas. Three of the featured blind sailors are Boston based. The film is making its way around the globe in outreach and soon will be fully released. The film received a Humanitarian Award at the Socially Relevant Film Festival NY and has screened around the globe at film festivals and in community outreach previews.

In regattas across the US and abroad, visually impaired sailors learn not to fear what they cannot see. They sail by feel: sensing the breeze on a cheek or tension in the tiller, listening to the pattern of waves hitting the hull and sails luffing in the wind. Sighted guides describe the racecourse and give tactical race advice. On the water disability is no longer a focus.
Sense the Wind is a journey led by four blind sailors — Nancy, Inky, Philip and Matt — as they train and compete at the Blind Nationals and press toward Japan’s Blind Sailing World Championships. It follows the evolution of these individuals over several years as they advance as sailors, through life’s turns — medical challenges, marriage, retirement and the vicissitudes of their sport, still new and evolving. Over time they help shape the future of blind sailing.
The film provides a rich narrative content for viewers whether sighted, blind, vision impaired, disabled or for anyone in search of an inspiring story. It subtly challenges one to consider what is possible and to re-examine what disability means. A variety of international advisory partners and diverse community organizations are interested in screening the film. They include disability and adaptive sports programs, libraries and educational institutions, and of course, sailing communities, as far as New Zealand and as close as New York.

In broadcast production Christine worked on the HBO hit Bored to Death and other network TV series and feature films. She was a selected filmmaker for the Celebrating Women Filmmakers Education Outreach at the Jacob Burns Film Center and taught video at the SUNY/WCC Summer Digital Labs. She was the Film Festival and Outreach Distribution Coordinator for the children of domestic violence documentary, The Children Next Door. Christine was an outreach advocacy consultant with CreativeFuture, an anti-piracy creative arts organization. She is a member of New York Film and Television and active on the Archives Committee project preserving stories of women.