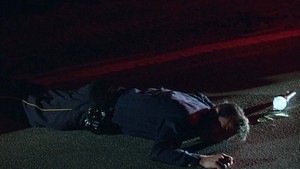 Among the most important documentaries ever made, The Thin Blue Line, by Errol Morris, erases the border between art and activism. A work of meticulous journalism and gripping drama, it recounts the disturbing tale of Randall Dale Adams, a drifter who was charged with the murder of a Dallas police officer and sent to death row, despite evidence that he did not commit the crime. Incorporating stylized reenactments, penetrating interviews, and haunting original music by Philip Glass, Morris uses cinema to build a case forensically while effortlessly entertaining his viewers. The Thin Blue Line effected real-world change, proving film’s power beyond the shadow of a doubt.

Nicolas Rapold is a writer and editor whose work has appeared in The New York Times, Artforum, Sight & Sound, Reverse Shot, and The Village Voice. He worked as editor-in-chief of Film Comment (both web and print) at Film at Lincoln Center, where he was part of the magazine’s editorial team since 2005, and was film editor at Stop Smiling magazine and chief film critic at The L Magazine for over a decade. He produced and hosted The Film Comment Podcast and the Film Comment Talks, and he covers festivals such as Sundance and Cannes. He has taught at New York University and Princeton, and has curated programs at Film at Lincoln Center, including The New York Film Festival; the Museum of the Moving Image; the 92 Y; and Anthology Film Archives.