Seeing the Star: Reflections on the Nativity 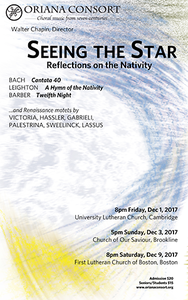 The Oriana Consort presents "Seeing the Star: Reflections on the Nativity"

The age-old familiar story of the Nativity, as told from various perspectives:

• the immortal words of the scriptures, set to immaculate choral music by six composers of the late Renaissance and early Baroque.
• the evocative poetry of Richard Crashaw, a near-contemporary of Shakespeare, set for choral voices by Kenneth Leighton: A Hymn of the Nativity.
• the foreboding poetry of Laurie Lee, a 20th-century British poet, set for choral voices by Samuel Barber: Twelfth Night.
• the poetry of a handful of 17th-century Lutheran theologians, brought together as the text of Bach’s Cantata BWV 40: Dazu ist erschienen der Sohn Gottes (For this the Son of God appeared).