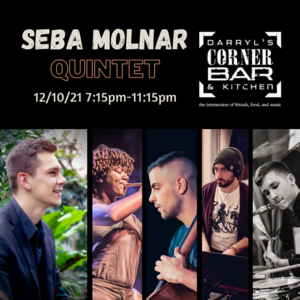 Start off the weekend right, with an evening of live music, food and friends at Darryl's Corner Bar. Featuring the Seba Molnar Quintet. Reservations are suggested if you want a table.

Seba Molnar is a saxophonist, composer, and educator, based out of Boston, Massachusetts. Originally from Canton New York Seba began performing at the age of 12. Seba moved to Boston in 2012 to attend the Berklee College of Music. While at Berklee, Seba had the opportunity to study with world-renowned saxophonists George Garzone, Bill Pierce, and Tia Fuller.

Seba has made a name for himself as an in demand saxophonist both as a side man and leading his own groups. Seba has played and recorded with Grammy nominated artist Debo Ray, jazz legend George Garzone, as well as Mighty Mystic, Java Jukebox, Kat Wright, The Collective and many more. Seba frequently plays in Boston and around the greater New England area. Seba has also played a number of festivals like BAM’S Fest, Newton Festival of the Arts, Burlington Discover Jazz Fest and in August 2021 headlined and helped organize the first annual Charles River Jazz Festival in Boston, MA. Seba’s talents have led him to be featured on national TV and radio.

Though his music is heavily rooted in jazz, Seba’s curiosity for new sounds and innovation has enabled him to create a wide array of music that transcends genre. In March 2020, Seba released his debut album “Level Up”, featuring mentor George Garzone, with Jens Sweeting, Soso Gelovani, and Clemens Grassman.