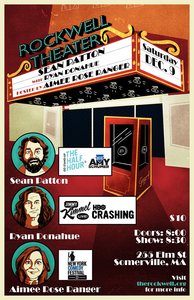 Comedian Sean Patton (Comedy Central Half Hour, Inside Amy Schumer) will be in Boston for one night only to headline The Rockwell Theatre in Davis Square on Saturday 12/9 @ 8pm. Featuring will be Ryan Donahue (Jimmy Kimmel Live, HBO's Crashing) and the show will be hosted by Aimee Rose Ranger (New York Comedy Festival).

Ryan is a comedian, writer, and actor based in New York City. After being named one of 2015's "New Faces of Comedy" by the Just For Laughs Festival in Montreal, Ryan made his late-night television debut on Jimmy Kimmel Live, and his half-hour pilot was featured at the New York Television Festival. In 2017, he appeared in HBO's Crashing, and will return to the show for its second season in 2018. Outside of television, Ryan has performed at the Eugene Mirman Comedy Festival, Limestone Comedy Festival, and the Great American Comedy Festival, among others, and he once had a skunk as a pet.

Aimee is New York comedian and actor with strong New England roots. She grew up in Maine and began comedy in beloved Boston. She currently lives in Brooklyn where she runs the popular comedy + poetry variety show called The Ranger Zone with her identical twin sister, April. She has performed in the Brooklyn Comedy Festival and the Women in Comedy Festival in Boston.