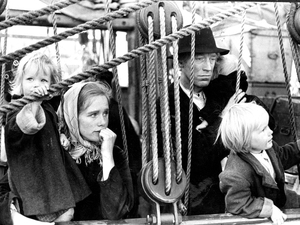 Come join us as we showcase a double feature of Jan Troell’s films The Emigrants (Utyandrarna, 1971) on October 21 and The New Land (Nybyggarna, 1972) on November 18. Both films, adapted from The Emigrants book series by Vilhelm Moberg, follow the life of the Nilsson family in mid-1800’s Sweden. We see their struggle as a farming family in Sweden, their eventual move to Minnesota in the United States, and the hardship of making a new place a home. The films are regarded as cinematic masterpieces that more accurately reflect the struggles of immigration. Both films received the Golden Globe for Best Foreign Language Film and were nominated for Best Foreign Language Film at the Academy Awards. These films are co-presented with our very own Scandinavian Library as a part of their Northern Lights Nordic Film Series. Watch the trailer here.