Scott Frank and The Queen's Gambit 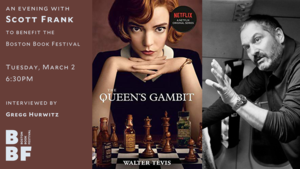 We are beyond excited that The Queen’s Gambit co-creator, executive producer, and director, Scott Frank, will join us for a wide-ranging discussion of creativity, writing across genres and media, and the making of the hit series. Scott’s versatility as a writer is evident—among his screenplays are Minority Report, Little Man Tate, Get Shorty, the X-Men film Logan, and the TV series Godless, as well as a thriller novel, Shaker. The Queen’s Gambit, the brilliant adaptation of the 1983 novel of the same name, has been downloaded by 63 million households since it launched on Netflix in October. What inspires his fertile imagination and what drew him to The Queen’s Gambit? And did he anticipate that this stylish, brainy series about a chess player would be the most talked-about show of the year?

Scott will be interviewed by New York Times–bestselling author Gregg Hurwitz. You can be part of the conversation, too! Sign up now for this session with one of the most talented screenwriters working today.