Save Ends with Animal Flag, The Godfreys 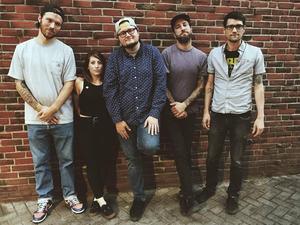 Save Ends
Animal Flag
The Godfreys

A minute or so into "PunkORama 30", the opening song on Warm Hearts, Cold Hands, Save Ends slugs their listeners in the face with a circle pit-worthy charge into the first verse of their first full-length.

It's only a little unexpected. Strength Vs. Will, their 2012 debut, displayed a band that mastered mid-tempo power-pop; full of rumbling guitars that play off of each other like the guy/gal vocals featured on each track, the self-released EP immediately impressed listeners, and it's no wonder that Tiny Engines scooped up the Boston band before any other labels could. So, when "PunkORama 30" leads with a similar melodic sensibility—with sparkling guitars and slow, stomping drums—then lunges suddenly into a double-time dash, it's a startling and exciting signal that Save Ends has applied a punk-rock punch to its pop sensibility.

Warm Hearts, Cold Hands follows the energetic trajectory set by this opening track. Some of the energy comes from the instruments—"Same Old Dice" throbs with Burton Wright's tom-heavy drumbeat, for example, while the piano on "Skeptical Sons / Curious Daughters" drips delicately against its roaring guitars. Other songs get their power from Christine Atturio and Brendan Cahill's complimenting vocals—from their confident voices bouncing off of one another in songs like "A Life They Wrote" or melting into harmony on "Song of Susannah", but also from their lyrics, which address life's relentless evolution; though they sneak some nerdiness into their songs (including references to Stephen King's Dark Tower and Dungeons and Dragons), the effect isn't alienation but solidarity.

And that's what makes Save Ends' first full-length so remarkable—its ability to connect with its listeners, draw them in with delicious melodies, and punch them in the gut.